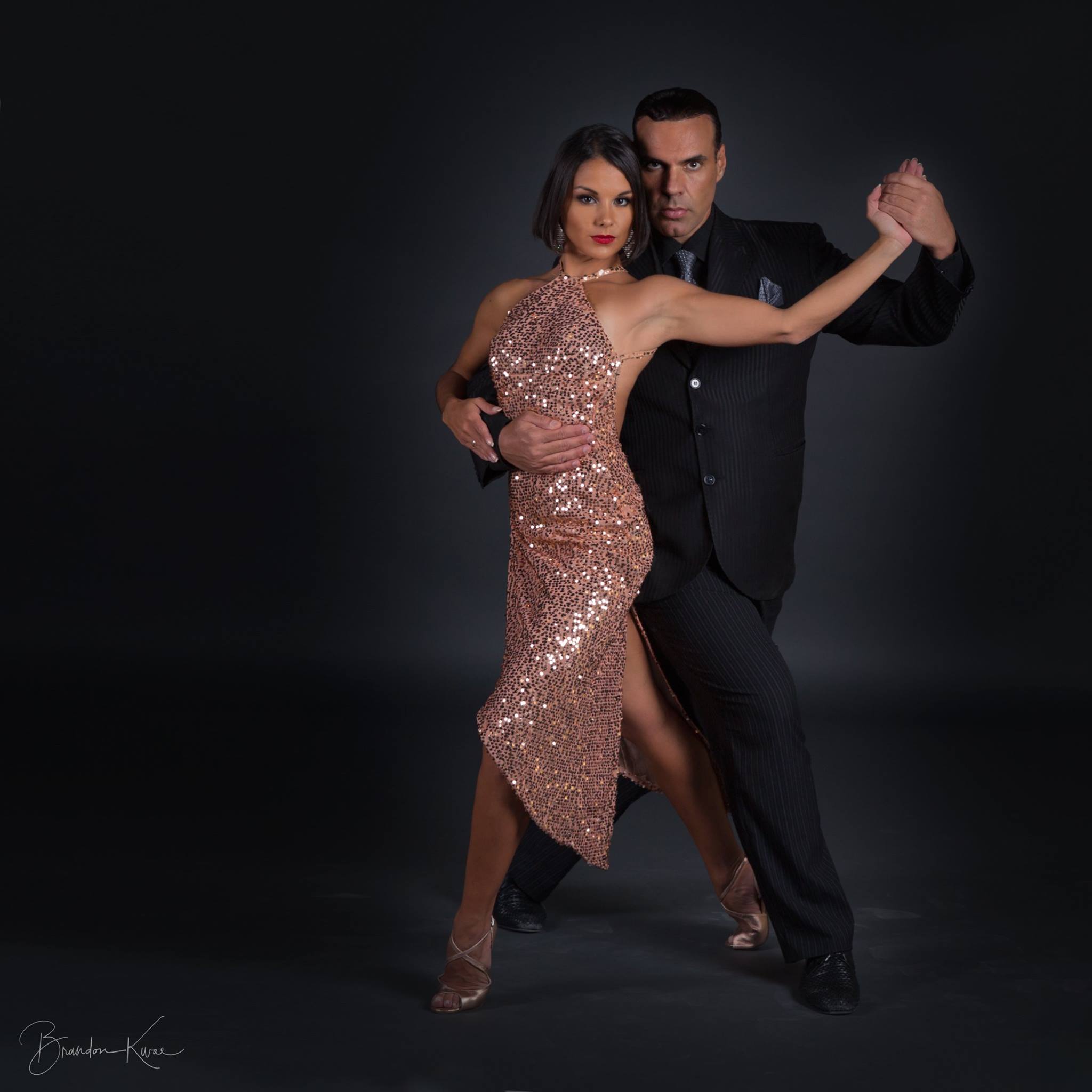 Guadalupe Garcia started dancing when she was five years old with Argentine Folklore. At 12 she began to dance tango, and at age18 she earned a degree in Argentinean Folk Dance Education. From 2004-2010 she was a member of the UBALLET (Ballet de la Universidad de Buenos Aires), Mora Godoy’s Tango Company, Juan Corvalán’s Tangomalambo’s Company, and Roberto Herrera’s Company, with tours which travelled worldwide. She toured Italy in 2005- 2006 with the shows “Tango Querido” (Barletta), “Noche Porteña” (Matera), and “Patio Argentino” of Tango and Folklore (Roma). She then taught lessons, seminars, and was dancer of the show “El Bandoneón”, Athens, Greece. In 2011 she went home to Argentina to perform with the Misterio Tango Festival. She then returned to Greece teaching courses and seminars and also toured the United Kingdom, Poland, France, Italy, Portugal, Dubai, Brazil, Chile, various cities in Asia, including Korea (World Yeosu Expo) where she was dancer of the show in the Argentina’s pavilion. Since 2007 she has performed in Buenos Aires, in shows such as Complejo Tango, Michelangelo, Taconeando, Piazzolla Tango, Gala Tango, and Tango Porteño. She was Principal Dancer at the 2014 show Glorias Porteñas, partnering Juan Carlos Copes. Together with Junior Cervila she has danced in the Tango e Paixão’s Show (Brazil) and the Tango Cabaret’s Show- Teatro Avenida – in Buenos Aires. She also leads classes and performances in New York, London, Moscow, St Petersburg (White Nights Festival), and WEST PALM BEACH .

Junior Cervila was considered by New York newspapers “the Gene Kelly of
Latin Dance”. Originally born in Brazil and based in Buenos Aires, where the
tango got into his blood, has a extensive professional history that includes
performances on Broadway (NY) at Gershwin theatre with “Tango
Argentino”, also performed at Lincoln Center and Town Hall in New York,
danced in the film “Tango” by Carlos Saura, nominated for the Academy
Award as Best Foreign Film and travelled the world with the show of Julio
Iglesias. He filmed for the BBC with the prima ballerina of the Royal Ballet of
London, Deborah Bull, and developed one of the leading roles in the
successful musicals “Tanguera”, “Piazzolla Tango” and “Tangorama”. He was
elected to a private tango show the Rolling Stones on tour in Argentina in
2007.
He danced with the orchestra of Daniel Barenboim in late 2006.
He danced in Buenos Aires at Luna Park, Gran Rex, Teatro Opera, Teatro Colon
and the Nueve de Julio in a historic concert of “Tango Argentino” to 15000
people.
Since 2001 runs his own company “Latin Dance Company” in which fuses
salsa, tango, samba and flamenco. He is considered by many as the best and
most versatile dancer nowadays.
He starred “Tanguera in Amsterdam, London (Saddlers Wells), Basel, Munich,
Paris (Theatre du Chateler), and traveled USA, Moscow and Italy with his own
show.
2014 to 2016- He was the choreographer of “Piazzolla Tango” and “Tango
Porteño”. Two of the most prominent tango shows in Buenos Aires seasons.
Also he is the judge of the finals Tango world Championship.
2017 – Judge of the USA Tango Championship. Performer and Choreographer
of tango in Andrew Loyd Webber’s “Evita” directed by Josh Rhodes in USA.